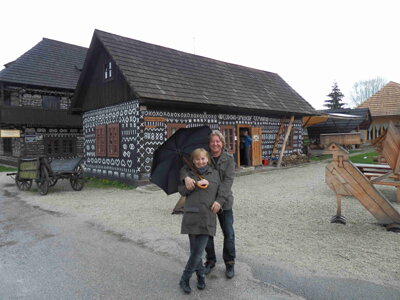 H&H Architekt - architectural studio was established in the year 1992 by spouses Ing.arch.Mikuláš Hladký and Ing.arch.Magdalena Hladká -authorized architects. Studio deals with designs of all kinds of buildings - residential and civil, from the pre-design arrangements to the realization. Part of designing arrangements is the performance of engineering activities leading to issuance of territorial and building approvals. Our firm further deals project-design of interiors and IT system buildings and interiors.

Project are processed on PC in 2D or 3D graphics, whose part could also be the visualization. We cooperate with constant specialized and authorized engineers in the area of central heating, airconditioning, sanitary equipment, fire protection, etc.

Other projects in the framework of public procurement by 2015-for SR-Kutuzovove barracks/2015/, reconstruction of objects for MV SR-KR PZ in Trenčín , OR PS in Považská Bystrica. Dental practice in Bratislava-the project on the PSP.

2016-the reconstruction of the hangar in the town for the implementation of energy efficiency for building contracts, and 61 to 2.57 Žilina,object nr.5 Kutuzovove barracs,Bratislava in December 2016

2018-2019-Implementation of administrative building objects-energy efficiency for MOSR, completion of hangar in Prešov. Project work of the logistics object in Žilina.

Design work on the modernisation and reconstruction of the buildings KRPZ in Nitra, Lučenec and Rimavská Sobota. Start implementing the reconstruction hangar. Architectural intention-a study of an apartment building in the old town in Bratislava, Slovakia.

2020- Project of new buildings Apartment houses on the housing estate East in the town of Stara Lubovna,Slovakia